Hanukkah – The Jewish Festival of Lights

In 2018, Hanukkah is from the evening of Sunday, 2nd December until the evening of Monday, 10th December. We are soon approaching the end of the Festival of Lights in the Jewish tradition and I thought it is time to remember this beautiful celebration.

Hanukkah is the Jewish Festival of Lights and it remembers the rededication of the second Jewish Temple in Jerusalem, in Israel. This happened in the 160s BCE/BC (before Jesus was born). (Hanukkah is the Hebrew and Aramaic word for ‘dedication’.) Hanukkah lasts for eight days and starts on the 25th of Kislev, the month in the Jewish calendar that occurs at about the same time as December. Because the Jewish calendar is lunar (it uses the moon for its dates), Kislev can happen from late November to late December.

During Hanukkah, on each of the eight nights, a candle is lit in a special menorah (candelabra) called a ‘hanukkiyah’. There is a special ninth candle called the ‘shammash’ or servant candle which is used to light the other candles. The shammash is often in the center of the other candles and has a higher position. On the first night one candle is lit, on the second night, two are lit until all are lit on the eighth and final night of the festival. Traditionally they are lit from left to right. A special blessing, thanking God, is said before or after lighting the candles and a special Jewish hymn is often sung.

Hanukkah is also a time for giving and receiving presents and gifts are often given on each night. Lots of games are played during the time of Hanukkah.

There are several theories about why Hanukkah is celebrated over eight nights. One legend says that when Judah and his followers went into the Temple there was only enough oil to burn for one night, but that it burned for eight nights. Another story says that they found eight iron spears and put candles of them and used them for lighting in the Temple. 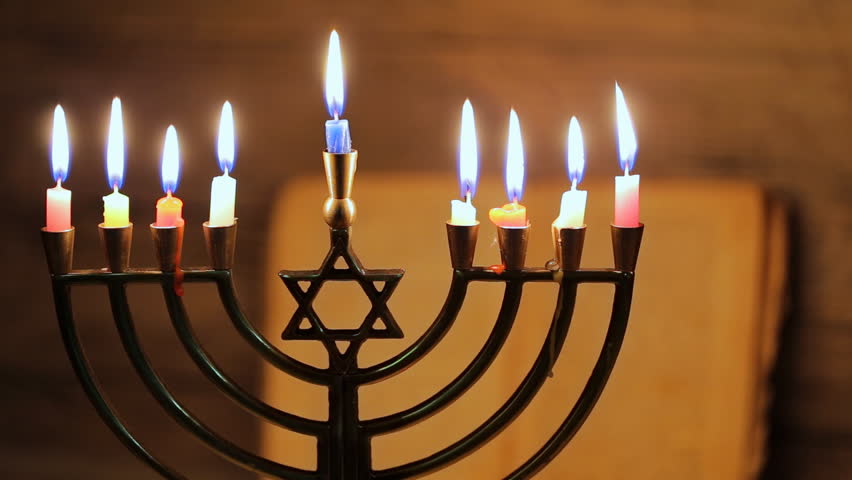 This entry was posted in Encountered on the way. Bookmark the permalink.