History + Traditions of Pentecost/Whit Sunday & Passover
The word Pentecost is Greek and it means “50th day.” Fifty days after Easter Sunday, we celebrate the coming of the Holy Spirit upon the Apostles and their followers, and the beginning of their Earthly ministry to make disciples of all nations.

At Pentecost, the Apostles and their followers were gathered in a room. Jews from all over the world were gathered with Peter, the leader of the Apostles and the Eleven. At this time, a great wind blew and a flame appeared as a tongue of fire, which split itself into many individual flames above the heads of all those present. The Holy Spirit came upon these people and each began to speak in tongues.

Peter then called all those present to be baptized and about three thousand people were baptized that day. 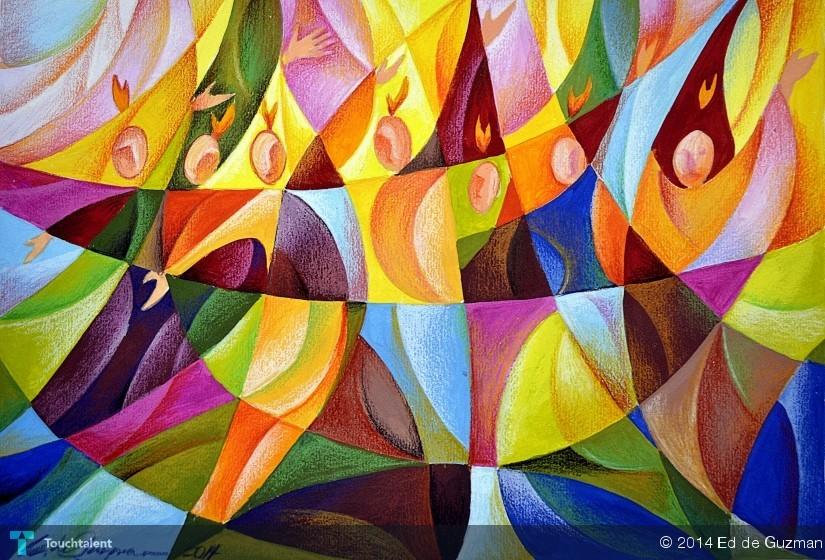 Traditions of Pentecost
“While ‘Pentecost’ is more widely used in the UK, traditionally the church has referred to the celebration as ‘Whitsun’, or ‘Whit Sunday’.
It is believed that the name comes from Pentecost being a day for baptisms, when participants would dress in white.
‘Whitsun’ is also thought to derive from the Anglo-Saxon word ‘wit’, meaning ‘understanding’, to celebrate the disciples being filled with the wisdom of the Holy Spirit.
Within Christianity the day is still popular for baptisms, while some churches hold Whit Walks. Folk traditions such as cheese rolling and morris dancing also have long-standing associations with Whit Sunday”

Passover
Pentecost is also a Jewish holiday, which the Jews use to celebrate the end of Passover. The major Jewish spring festival which commemorates the liberation of the Israelites from Egyptian slavery, lasting seven or eight days from the 15th day of Nisan.

Passover or Pesach (/ˈpɛsɑːx, ˈpeɪsɑːx/;[4] from Hebrew פֶּסַח‬ Pesah, Pesakh) is a major, biblically derived Jewish holiday. Jews celebrate Passover as a commemoration of their liberation by God from slavery in ancient Egypt and their freedom as a nation under the leadership of Moses. It commemorates the story of the Exodus as described in the Hebrew Bible, especially in the Book of Exodus, in which the Israelites were freed from slavery in Egypt. According to standard biblical chronology, this event would have taken place at about 1300 BCE (AM 2450).

This entry was posted in Encountared on the way. Bookmark the permalink.